The three-year-old girl stoops down along the rocky beach outcropping below the bluffs of Crystal Cove State Park. Her mother close behind, cell phone camera poised for the perfect shot of her daughter—the tide pool explorer.

“Look, another puddle, Mom,” she said, scampering from one rock to another.

Although the girl hadn’t spotted them yet, those “puddles”-—or pools of seawater that collect on exposed ocean rocks when the tide goes out—were teaming with marine life: hermit crabs, limpets, sea anemones, clumps of mussels and more. The mother-daughter duo was among the thousands of visitors each year who scramble and scour the four main tide pools at the State park—named Rocky Bight, Crystal Cove, Reef Point and North End Treasure Cove—in search of hidden sea creatures and near-invisible life. 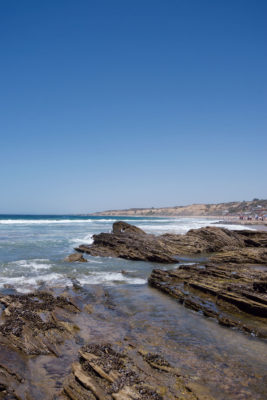 “Tide pools are like pot luck. You never know what you’ll get, but it’s always cool,” said Tim Arehart, a five-year volunteer tide pool educator for the Park, during a recent tour.

Shifting to his hands and knees, Arehart encouraged his group of about 30 visitors to “get your face down by the pool. Most things are small, camouflaged and slow.”

A 12-year-old boy from Minnesota needed no encouragement. He knelt on the rough dark rocks and peered into a clear pool about two feet deep. “This is amazing,” he said, gently placing a finger into a pink and white, flower-like creature—called an anemone. Within seconds, the “flower” started to close around his fingers. “Whoa! It’s so sticky, like glue!” he yelled, then laughed as he pulled his fingers back.

Arehart then nimbly stepped from rock to rock until he reached a clump of seaweed. “The small seaweed in the pools has many tiny animals and worms,” he said, running his fingers through the stems. “The larger seaweed on the rocks has snails and crabs.”

As they watched quietly, small hermit crabs began scooting across the bottom. If you looked closely, you could see their antenna-like eyes. When someone moved, they hunkered back down in their borrowed shell homes.

“Where do we find octopus?” asked one visitor. Arehart led the woman and a few others to a known “hiding place” for an octopus. “You have to gently put your hand under the large rocks that have a hole underneath,” he said. “Then see if the octopus will ‘shake hands’—if they are there.” He kneeled, bent over the rock and slowly emerged his arm deep into the water, softly wiggled it around, but no handshake this time.

Arehart explained octopus can be shy, and are extremely intelligent and curious. “They taste with their tentacles. Once they realize that you aren’t food they let go, or if you tense back a little, then they usually and readily let go. Always be gentle so as not to cause the marine life any stress.” He also explained that it is illegal to pick up or move any sea creatures.

Although the park encourages tide pool exploration, one of the main goals is to help visitors understand this complex and sensitive eco-system—and learn why it needs vigilant care and protection.

“Tide pools are a peek at another ocean world,” said Sara Ludovise, education manager at Crystal Cove Alliance (CCA), the non-profit partner of the State park. “It’s a way to get out into nature. As a tide pooler you must remember tide pools are sensitive eco systems and we don’t want to negatively impact them. It is someone’s home.” During summer, it can be more challenging to find tide pools since low tide—the best time—comes in the middle of the night. There are no guided tours during these months, but CCA hosts Community Days in the Historic District each Wednesday during the summer, which includes open houses of some of the cottages and Citizen Science tide pool activities open to entertain the public when the tide is low.

For the best tide pool experience, check the tide charts and weather and slow down to explore—rather than stroll. Wear appropriate clothes—jeans are actually better for kneeling on rough rocks.

Although visitors are always reminded that tide pools are protected areas (nothing can be removed except driftwood or sea glass) everyone always goes home with the best souvenirs—great memories.